Jabal (Mountain) as we named him…he is one of the strongest and very smart builder donkeys, he arrived to our station in a very sever and bad way.

If you remember in the last video that “Jabal ” is the leader of Ayman’s Group (one of owners of builder donkeys) he was working so hard carrying all that heavy loads on his back working in a very bad weather and walking up angel hill, climbing up six floors and get back to his owner to carry more and more of heavy loads, for 10-12 hours per day whatever the difficulties the pain, the suffering and the danger from slipping and falling down.

Unfortunately last week was so cold in Nablus and the weather was almost freezing (under 0~C) and in some places the white coat of snow covered the top of the mountains. It was so cold the owner connected the water source for his donkeys by “an automatic water bottles” which fill itself in a certain level to let the donkeys drink in a free way. The nature of the donkeys is really so unique which reflects how they are a smart creatures. When that cold weather affected Nablus, all the water sources became like a freeze plates. The water was so cold for donkeys to drink, those poor donkeys survived in their cold stable which located at the top the mountain 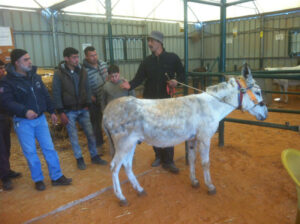 The owner went there to check the donkeys to make sure his animals are ok. He was lucky, all the group was so great he warmed the donkey’s room by making a small fire in a safe way and made sure they had a fresh grains and warm water. Except one donkey (the leader) He was laying on ground he didn’t want to eat or drink, he refused everything just lying on the ground as a tired donkey without any movement, he tried to stand up with owner’s help. But he still wanted to lay down again.

The owner immediately called Dr Jaber asking for help, and then he arranged with Dr Rakan to transport the donkey to our clinic in Nablus. We received him as an emergency case because his body condition was so bad, a very low body temperature, with a very high Heart Rate and Respiratory Rate and very weak body. After taking the vital signs and recognizing how life threatening, dehydration level he suffer Dr. Rakan gave him intensive fluid therapy, with the suitable vitamins and supportive treatments he was so dehydrated with a deep sunken eyes and dry skin. He stayed with us for a week with a daily treatment brushing to calm him and a body coat to warm his body

He was getting better every day with great levels of improving. The owner was calling Dr Rakan every day to ask about his donkey and he arrived to us after finishing the treatment with a great happiness and proud to bring back the leader of his group. Dr Jaber discussed a few important points with him about how to take care and support his donkeys during cold seasons and he should wait before letting his donkey leads the other members of his group during the work he should have enough rest to gain his strength again. 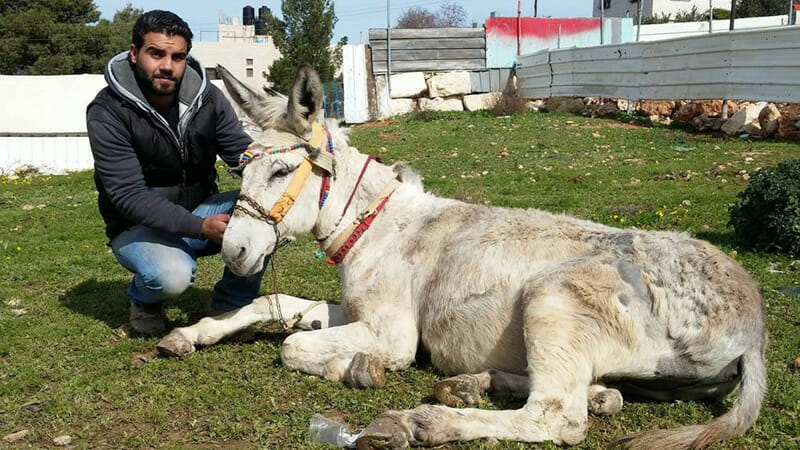 He left the station pulling his donkey with prayers and thanks for our amazing work. Best wishes to the bravest Donkey (Jabal)