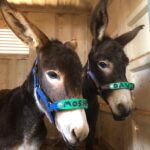 When the last week of October 2019 began, who’d have thought that two abandoned foals with sad stories would end up making their home at Safe Haven?  This is the story of David and Moshe.

Late one wet and windy October evening, our sanctuary team received a call from the authorities in Jerusalem to say that a young foal of about 4 months old had been abandoned in a rubbish tip near the city.  Our team immediately set off on the 2 hour drive to Jerusalem to bring the little foal to our sanctuary.  David, as we decided to call him, was soaking wet and shivering in the cold.  As soon as we got him to Safe Haven, we put him under a heat lamp and by the next day he was feeling much better and settling in.

Two days later, we received an even sadder phone call.  A man had found a baby donkey near a busy road, standing over the body of his dead mother who had tragically been hit by a car.  The very kind man stayed with the foal until we were able to get there.  Moshe was even younger than David at about 3 months old.  Once again, we took the little foal back to the sanctuary and put him under a heat lamp.  He immediately seemed very interested in his surroundings and showed no signs of trauma.  Within a few hours, he and David were bonding and have become fast friends.