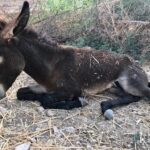 In early September 2019, a stranger telephoned late one evening to report a sighting of two injured and bleeding donkeys on open ground between Nablus and Jericho in the Palestinian Territories.  Arriving on the scene, our vet Dr Rakan soon realised that horrifically, both animals had been shot.

He wasted no time and examined the donkeys straightaway.  One, a brown male about two years old, was lying on the ground.  When the time tried to lift him, they realised that the bullet had gone through the femur and crushed all of the bone shaft.  It was badly swollen and the donkey couldn’t put any weight on it.  Dr Rakan made the difficult but humane decision to end the animal’s considerable pain and misery, and put him to sleep.

Mercifully the other donkey, a grey female of around the same age, was in better shape.  She had been shot in the left thigh and the bullet had scratched the abdomen.  Although she was lame, she could at least walk.

Dr Rakan gave her painkillers and arranged for her to be transported to our clinic in Nablus.  As soon as she arrived back at the clinic, she was given an ultrasound to check that no bullet remained in her body.  Fortunately for her, the shot had passed straight through.  Dr Rakan put the donkey on more painkillers, as well as a course of antibiotics, and cleaned and dressed her wound.

We are delighted to report that Noelle, as we have called her, is now recovering well.

Would you like to sponsor Noelle for just £36 for a year?  You will be contributing towards her food, vet bills and general care.  To sponsor Noelle, visit https://www.safehaven4donkeys.org/donkeys/noelle/